From the book jacket:

People call us the “not-so-Small” family because our last name is Small and we have about a million kids. Well, six. And when your family’s big, crazy stuff happens all the time, like what happened to me on Stitches Saturday …

I’ve had this book on my desk to read for quite some time. With my granddaughter’s birthday Sunday, I thought I’d give it a quick look so I can give it to her.

Well, I was truly surprised. In fact, I ended up reading it word for word!

Poor little Cleo gets a cut on her head and needs to be taken for stitches. It was an accident, but she’s worried her brother might get into trouble. After all, he’s the one who was climbing the bookshelf when it fell over.

This book is so appropriate for my granddaughter. She’s kind of klutzy and has gone to the emergency room a couple times for stitches.

Jessica Harper is a wonderful author and now, I find out she can also write great children’s stories.

I’m so glad I read “Uh-oh, Cleo” because I truly enjoyed it! Now, I will get to pass this great book on to my granddaughter. By the way, it will be her first book signed by the author and I’m so glad that author is Jessica.

Aren't these guys too cool?! I took these pictures yesterday. I couldn't believe how close they were. I love watching the pelicans that hang out in our area wildlife refuge. They are so fun to look at.
Posted by LuAnn at 2:25 PM 1 comment:

This week, I came away with quite an eclectic array of items.

2. Confessions of a Trauma Junkie by Sherry Jones Mayo (for review)

Author Samantha Gail sent me a cover flat and badge from her book “She Who Dares Wins.” How fun!

And – to top it off – I received a copy of the e-book “Faith of the Heart” from author Sandy James.

From the back of the book:

“When a respected professor’s wife drives to her death in an icy river, an illicit relationship between a student the his teacher threatens to come to light, and within days Atherton University is the scene of escalating speculation and intrigue.”

This was an interesting book, to say the least. When it first came out in 2001, it received mixed reviews. Many weren’t very positive.

I did like it, although I thought it was a little drawn out. In this case, Christopher Rice went into too much detail about the characters’ dysfunctional lives to the neglect of the story itself. It took over half the book before he ever begins to talk about what is really happening.

He is a good writer. He just needs to get to the point sooner as several times I wanted to put the book down and forget it.

I’m glad I finished it, though. It turned out to be a very intriguing story. However, I don’t think I’d recommend it to someone who wants an easy read.

I give this novel three books because of the imagination Rice (who by the way, is the son of author Anne Rice) put into the writing of this story. It is a good premise.

Something Borrowed by Emily Giffin

From the back of the book:

Meet Rachel White, a young attorney living and working in Manhattan. Rachel has always been the consummate good girl - until her thirtieth birthday, when her best friend Darcy throws her a party. That night, after too many drinks, Rachel ends up in be with Darcy's fiance. Although she wakes up determined to put the one-night fling behind her, Rachel is horrified to discover that she has genuine feelings for the one guy she should run from.

I really liked this book. Emily Giffin brings to the reader a wonderful group of characters the reader can definitely relate to. In fact, the book is all about the characters and is never bogged down with extraneous descriptions of the scenery or location. It's simply a story about relationships and how intertwined they can become. Whether you view them as honest or dysfunctional or just plain wrong, this book will make you cry, laugh and yell out loud. Be sure there are no interruptions when you begin reading this novel. You'll not want to put it down until you find out how it turns out.

The Friday Fill-Ins post you find around blogland is hosted by Janet at http://fridayfillins.blogspot.com/.

1. She had a great time at the party as she watched her best friend make a fool of herself.

2.My cell phone is by my side, always.

3. I know this: No one ever said life was going to be easy, so deal with it!

4.Clem was hiding in the woods next to his still.

5. These words apply to me: an interesting blend of wife, mom, grandma and a darn good journalist.

6. When I went outside earlier today, the sun was shining.

7. And as for the weekend, tonight I'm looking forward to finishing the book I've been reading, tomorrow my plans include working and Sunday, I want to take a drive, but I will probably be trying to finish some writing!
Posted by LuAnn at 10:07 AM No comments: 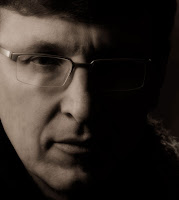 What a special treat!

Today, I'd like to welcome author Richard Aaron to my blog. He wrote the novel "Gauntlet" (see my review on Tuesday, June 23).

Tell us a little about yourself.

I was born in Rotterdam and emigrated to Canada with my family at the age of 8. After struggling through junior high and high school, I received a degree in mathematics from the University of British Columbia. From there, I went on to get degrees in law from UBC and the London School of Economics. I started practicing law on September 10, 1981 (it was the day my life really started, so I’ve remembered it!). I started my own firm in 1993 and now have eight lawyers working with me, with a support staff of about 25.

In regard to writing (which I think is probably more interesting to you), I started about four years ago, when some neuropsychiatric tests came back with a stamp that said “THIS MAN SHOULD BE WORKING IN FICTION.” I’m a workaholic and fairly obsessive-compulsive. I’m your classic telephone breaker, glass dropper, computer wrecker, truck/car bumper cruncher and am stumbling and bumbling most of the time (just ask my family, friends and editor). I have four children, all teenagers, and four pets (two dogs, two cats), all of which are narcissistic. I have a stunning wife and, given the above, she is the one who keeps me from shuffling off the coil of sanity.

Talk a little about your book.

Gauntlet is a high-tech novel of international intrigue, pitting a young autistic mathematician (Turbee) and a small American Intelligence Agency against a sophisticated terrorist ring bent on wreaking terror for profit. The plot is standard fare, the telling is not. Four and a half tons of Semtex go missing in Libya. It has been stolen by the agents of a brooding holy man in Afghanistan, who quickly promises a massive terrorist attack against the United States and challenges the Americans to stop him.

A game of cat and mouse begins, as the Semtex makes its way across the globe and toward its intended target. Turbee nearly has it figured out but is hampered by his autism in communicating this with his peers in the agency. As the terrorists grow closer to their destination, the good guys find themselves one step behind, struggling to save the American public from a devastating blow to its economy.

For all of the “cutting-edge research, complex plotting and in-depth characterizations” (as per Publisher’s Weekly), you will need to buy the book.

What sort of research was necessary to write Gauntlet?

I went through huge amounts of research. I think for every page of Gauntlet I have at least three pages of research floating around on various hard drives. In this genre, the audience expects some attention to detail, especially when it comes to describing technical devices, the nature of the military and the weapons that it uses and so on. It’s also an area of pride for me – the detail I’m able to use brings me great personal pleasure.

Gauntlet is also a big novel when it comes to travel. We visit many different geographical areas as the novel unfolds and for realism and accuracy, I studied those areas extensively so I could write them in what I hope is an accurate representation.

Why did you become a writer?

When I was younger I went through a phase of extreme depression and had some neuropsychiatric testing done. Those tests came back showing signs that I would be talented at dealing with fiction. This didn’t surprise me: most lawyers are, by necessity, writers of fiction. I had never considered taking that to the next level, though, and writing a book.

After some encouragement from friends and family, I decided to take a stab at it. It took quite a bit of editing and guidance, but you’re seeing the final product of that leap of faith.

How did becoming a writer change your life?

It has turned my life upside down. I had no idea, when I started, what the concept of ‘editing’ involved and how demanding that could be. I had no idea that once the novel was published, which was a miracle all by itself, we would start the brutal the round of publicity and marketing.

And that doesn’t even begin to cover how my characters have taken over my life, mentally! I have totally changed the internal organization of my law firm, so that I can devote four or five hours a day to lawyering, and the rest of the day to writing, editing, and marketing.

Who influenced you the most in your writing career?

What’s the best writing advice you ever received?

What’s next for you?

I am working with my editor to put a publishable, presentable version of Counterplay on the table. In the background, I am also sketching out a third novel in the trilogy.

Thank you, Richard for joining us today. It's been a pleasure!