... Festival of Friendship.
Here in Othello, we have a population of 70 to 80 percent Hispanic, depending on the time of year when heads are counted. Unlike many places, the people here are very tolerant of each other and, in fact, there are some very deep friendships between the Hispanics and Anglos.
One way the town celebrates that relationship is with the annual American Fiesta Amistad. It’s a fun and exciting weekend that demonstrates how the two cultures influence each other and the city.
It’s a music festival with a variety of styles. Every one gathers at the park as band after band takes to the stage. The idea is to alternate between Mexican bands and American bands.
The result is a great time of music, food and fellowship.
This year marked the 10th anniversary of the festival. As usual, my husband and I were at the park for most of the day. I’ve interviewed many of the bands for a variety of publications and they always stop by to say hello when they see me sitting in my lawn chair enjoying the event.The pictures I’ve posted are of two bands that performed that day. 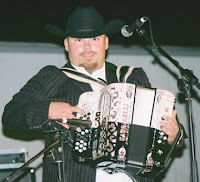 This young man is Ricky Garza (left) with the band Destino Norteno. He’s very good at playing the accordion, a traditional Mexican instrument. Destino is getting ready to go on tour soon. It will be their first time on the road and I wish them a successful journey. 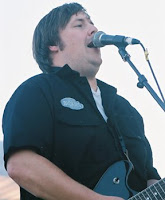 This photo on the right is Andy Sulzman, who has a Christian rock band. I worked with his wife for a while and she has babysat my grandson on occasion. Andy and his “Band of Brothers” recently returned from a two-week tour. 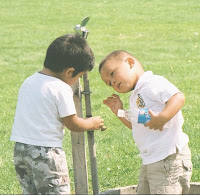 I just had to add this photo. I also took this one at American Fiesta Amistad. The two little guys were trying so hard to figure out how to work the faucet. They were so cute. They never did get water to come out of the pipe and ended up wandering back to where their parents were sitting.
I call this "Who cares about the music? Where's the water?"

I thought it would be fun to read a Christmas story in the middle of summer. We’ve been having temperatures in the high 90s for weeks, so snow sounds good to many people here right now. I picked this one by Luanne Rice because she is the type of writer who takes you right into the story.
Each December, Christopher takes a load of Christmas trees from his farm in Nova Scotia to a particular spot in Manhattan to sell. Often, he will bring his children along.
One year, the oldest son decides he prefers life in the big U.S. city of New York and runs away from his father and sister. He has no desire to return to the farm and the hard labor involved in raising the trees.
Christopher continues to return each year to sell his trees and makes it a point to try to find his son. Unbeknownst to him, a woman he often talks to is in constant contact with Danny and helps him by providing food, shelter, etc. You see, Danny became a street kid. His life on the farm did nothing to prepare him for the big city.
Catherine witnessed the running of Danny and how Christopher tried to stop him. She misunderstood the situation and saw it as an abusive relationship between the two. However, that was nowhere near the true facts. Actually, Christopher, who is a single parent, loves his children deeply and would do nothing to ever harm them. At the time, he was distraught because Danny had just announced he wasn’t ever going to return home to his family and tempers flared. The police showed up and arrested Christopher. Once the circumstances were explained, they let him go and the officer made it his mission to try to help find Danny.
As Catherine and Christopher visit on the street corner, she begins to find the man more and more fascinating. Eventually, a love affair develops between them. All is well, until he finds out she has kept the whereabouts of Danny from him.
This is a fun story and makes the reader think about such things as loyalty, trust and promises. Don’t wait until the holidays to read this book. It can be read any time of year and may provide some relief from hot summer days for you, as well.

Anita Shreve is one of my favorite authors. Her writing is very poetic and wonderful to read.
I know several people who refuse to read her books because of the little twists she puts at the end. For me, that’s one of the things I enjoy about a book. I find it fun when I’m sure I have a story figured out and the writer proves me wrong.
I found “Where or When” particularly poignant for today’s society. There are many people who have located former friends and lovers via the Internet. What does a person do if they suddenly find they still have feelings for someone they haven’t seen for many years?
That’s the premise of this book, although the two former lovers don’t find each other in a different way. The woman is a poet and gives a reading where the newspaper does a write-up about her. The man sees it and recognizes her right away.
Needless to say, he contacts her and they begin a passionate, emotional affair despite the fact they both have spouses and/or families who depend on them.
Shreve has made this book one that leaves questions in your mind whenever you put it down. Not only do you wonder what happens next, it makes you think about the topic in general – as I mentioned at the beginning of this review.
This is a marvelous book and I think you’ll enjoy it.