This blog tour is hosted by Savvy Verse & Wit. Click on this link to learn more about this event and to see what other blogs are participating! 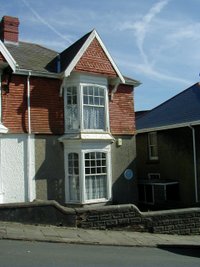 This is the house where Dylan Thomas was born.
Dylan Marlais Thomas was born Oct. 27, 1914, in South Wales Swansea. His father was an English literature professor at the local grammar school and would often recite Shakespeare to Thomas before he could read. He loved the sounds of nursery rhymes, which led to his love for rhythmic ballads. Although both of his parents spoke fluent Welsh, Thomas and his older sister never learned the language, so Thomas wrote exclusively in English.
As a child, Thomas was neurotic and sickly. He avoided school, preferring to read on his own. He excelled in English and reading, but he failed in other subjects. He began writing poetry, which was published in school magazines.
He dropped out of school at the age of 16 and became a junior reporter for the South Wales Daily Post. He left that position in December 1932 to concentrate on his poetry. It was during this time, in his late teens, that he wrote more than half of his collected poems. Thomas was obsessed with words — with their sound and rhythm and especially with their possibilities for multiple meanings. 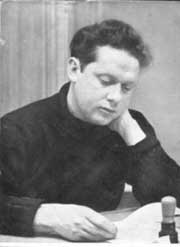 Dylan Thomas
In 1934, when Thomas was 20, he moved to London, won the Poet's Corner book prize and published his first book, 18 Poems, to great acclaim. The book drew from a collection of poetry notebooks that Thomas had written years earlier, as would many of his most popular books. Thomas also began a habit of alcohol abuse.
During the almost two years between the publication of 18 Poems and 25 Poems (in 1936), Thomas moved back and forth between London and Wales a great deal. In London, he began to meet influential people in the literary world. At this time, Thomas had a mostly long-distance relationship with the poet and novelist Pamela Hansford Johnson, later the wife of novelist C. P. Snow. His drinking became a serious problem and his friends would sometimes take him off to out-of-the-way places in Cornwall and Ireland to remove him from temptation with the hope that he would do more writing.
Two years after the publication of 18 Poems, Thomas met the dancer Caitlin Macnamara at a pub in London. They married July 11, 1937, penniless and without the blessings of their parents.
Despite the passionate love letters Thomas would write to her, the marriage was turbulent, with rumors of both having multiple affairs. His third book, The Map of Love, appeared in August 1939, the year war broke out in Europe.

Dylan Thomas and his wife Caitlin Macnamara
In 1940, Thomas and Macnamara moved to London. Thomas began writing Adventures in the Skin Trade, a novel he never completed, though its first section was subsequently published. To avoid the air raids, the couple left London in 1944. His Deaths and Entrances, containing many of his most famous poems, was published in 1946. They eventually settled at Laugharne in 1949, in the Boat House where Thomas would write many of his later poems.
In January 1950, at the age of 35, Thomas visited America for the first time. His reading tours of the United States, which did much to popularize the poetry reading as a new medium for the art, are famous and notorious, for Thomas was the archetypal Romantic poet of the popular American imagination: he was flamboyantly theatrical, a heavy drinker, engaged in roaring disputes in public and read his work aloud with tremendous depth of feeling and a singing Welsh lilt. 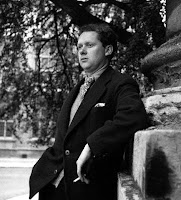 Dylan Thomas
Thomas toured America four times, with his last public engagement taking place at the City College of New York. A few days later, he collapsed in the Chelsea Hotel after a long drinking bout. He returned to his room in great pain and a doctor was summoned, who administered a large dose of morphine sulphate. Thomas slipped into a coma and dies at St. Vincent’s Hospital in New York City Nov. 9, 1953. He was 39. He was buried in Laugharne, and almost 30 years later, a plaque to Dylan was unveiled in Poet's Corner, Westminster Abbey. 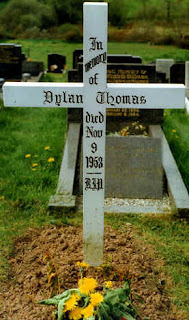 Dylan Thomas' grave at Laugharne.
Today, his work is in a permanent exhibition at the Dylan Thomas Center, located in Swansea, Wales. It opened in 1955 through the efforts of American ex-President Jimmy Carter, who was a Thomas enthusiast. The center includes a restaurant and bar, bookshop care, conference rooms and theater. 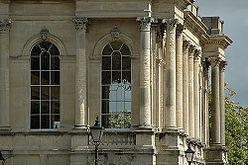 Though wise men at their end know dark is right,
Because their words had forked no lightning they
Do not go gentle into that good night.

Good men, the last wave by, crying how bright
Their frail deeds might have danced in a green bay,
Rage, rage against the dying of the light.

Wild men who caught and sang the sun in flight,
And learn, too late, they grieved it on its way,
Do not go gentle into that good night.

Grave men, near death, who see with blinding sight
Blind eyes could blaze like meteors and be gay,
Rage, rage against the dying of the light.

And you, my father, there on the sad height,
Curse, bless, me now with your fierce tears, I pray.
Do not go gentle into that good night.
Rage, rage against the dying of the light.
Posted by LuAnn at 9:52 AM

Thanks for participating. I had no idea Thomas was writing a novel nor that he didn't finish it.

Good information. Very informative. Thanks for your research and the post!